If you’re from Georiga, you probably know about Toccoa Falls, and while it is breathtaking in its height and amount of water that plummets over its edge, there is another waterfall tucked a mere 2.5 miles in the wooded forest near Toccoa Falls.

While we did enjoy the impressive Toccoa Falls, it lacks the outdoors feel of visiting a waterfall. Toccoa Falls is found behind a gift shop on the campus of Toccoa College. You pay a small fee, walk through the shop and out the door to a fenced area with a paved path and a beautiful little creek. It is a lovely spot, but you go around a corner from the shop and boom! You are at the falls. It feels commercialized, urbanized. We saw the falls, snapped some photos, but were left wanting more. As we walked around the area, we came upon Randy, a campus instructor who asked us if we knew where Contentment Falls was. Our interest was piqued! There is another waterfall here? The answer is yes, and apparently, it is one of two water wonders that are the schools best-kept secrets. The only thing our new acquaintance could tell us was it is behind the science building, follow the creek.  Well, ok then.. off we went.

As we walked, we met a student who gave us a bit more information.

“Follow the river. You will walk quite a ways and end at a dirt road. Turn left on the dirt road and then a right on the next dirt road that is only 50 yards or so away. Continue down that dirt road another 500 yards, and you will see some rocks piled up. If you aren’t paying attention, you will miss it. Turn right at the rocks.”

It turns out his directions were spot on!

Two miles? No big, we got this.  Let me tell you this is not a park trail. The fallen trees are not mere twigs. They are huge mammoths as big around as a horse that you have to straddle over.

The path became pretty wild with fallen trees and brush. Because we hadn’t planned on hiking that day, neither of wore waterproof hiking boots but worse, I had my canvas Tom’s on as we went sloshing through wet sticky mud and crossing the creek no less than four times. We also did not pack water or snacks because remember we were just going to see Toccoa Falls right? By the time we returned on our 5-mile hike my toenails were bruised black (and are still black five weeks later), and my shoes were soaked and muddy. Good thing Tom’s can be washed! Lessoned learned: Always wear your boots and carry food and water.

So here we go.. Do you want to find this secret place? Here’s how:

Start at the parking lot of Toccoa Falls and Gift Shop. You will see the  Gathany Museum a building that looks like this:

Go to the right of the building, and behind it, you will see a path running beside a creek called, “Deadman Branch,”exciting name, which is wrapped up in local history. At the trailhead, the way is wide and clear of debris. You will hop over the creek a few times as you amble along.

Follow the creek for about 2 miles. The path grows pretty wild after a mile of walking. 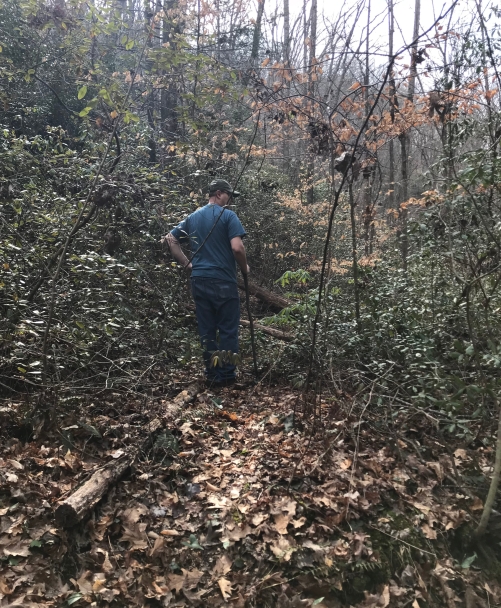 Believe it or not, there is a path up ahead

I’m not kidding Y’all the path gets crazy wild. We had to crouch through a tunnel of fallen trees to continue. At this point, Shane was pretty much ready to turn back, but I was hell-bent on finding the falls. He’s so good to me, his back was killing him, but he knew I wanted to see it, so he continued on without complaint.

Tunnel of trees we had to crawl through

The deeper we went, the more beautiful the creek and woods became. There wasn’t another human being out here, just us, the wildlife, and the stream. 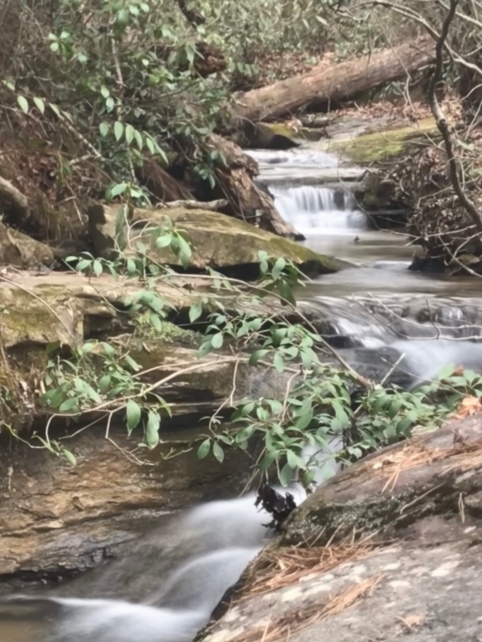 Thankfully previous hikers had provided fallen trees to help us along our journey as neither of us were wearing our hiking boots. 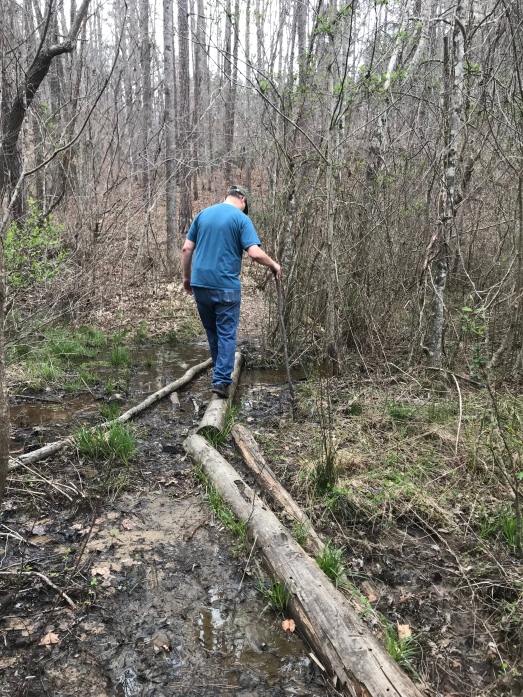 Continuing along, we crossed the river several times, following the path before us.

At almost 2 miles in Shane spotted this unusual sight, and we had to cross a 15-foot ravine to go check it out. When you see it read more about it here.

The trail drifted uphill after passing the flag. The sky was darkening with a pending storm, and our throats were parched. Our tummies rumbled with hunger, and we almost turned back, but I could feel we were getting close.  I decided to continue on. Uphill we went. I told Shane, “if there isn’t a dirt road at the top of this hill, we will turn back.” I  said a silent prayer as I ran up ahead to scout it out and sure enough, I saw the forest was clearing, and the dirt road was ahead! As instructed we turned left on the road and then within eyesight we could see the road off to the right that we were supposed to take next. 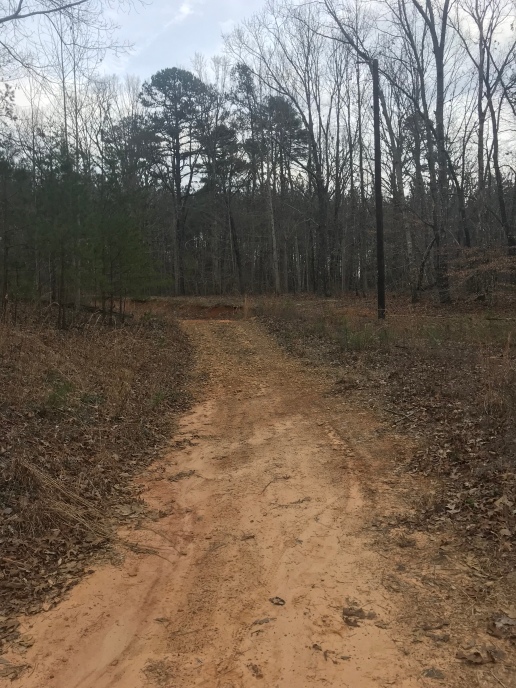 500 feet down the second dirt road, we saw the rocks piled up, just like the student told us.

We turned right and followed the path. We could hear the rush of the water, but the falls were nowhere to be seen in the densely covered brush. We looked around, there was a path with a fire ring, and just beyond it, we could see the falls through the brush.

At the top of the falls, a small stream flows and cascades down onto the rocks below. The water was so clear and crisp, and we were thirsty so that we couldn’t help ourselves. We scooped it up in our hands and took a drink. It tasted pretty damn good, another prayer that it was parasite free. Side Note: ALWAYS CARRY WATER!

Shane tells me I am lousy at measurements, but I would say the falls plummeted about 50 feet below on to huge boulders. We peered over the edge and watched the spray hitting the stones.

I needed to see more. I left Shane at the top and headed through the woods to try to reach the bottom of the falls. I am not sure if there is a path leading to it, I never found one, so I just held on to tree limbs and slid down a huge long hill on my rump, grasping trees to keep myself from falling too quickly. It didn’t take but a moment and I was at the bottom of the ravine surrounded by enormous boulders.

In the photo above, it appears that this waterfall is but a trickle but these stones are enormous and there is enough room for you to climb behind the falls. I could stand behind it fully. Like I said the drop from the top is about 50 feet.

I felt so satisfied that I found something not many people are aware. I witnessed this beautiful creation. I felt close to nature and my Creator. We couldn’t be content very long though, the sky was threatening, it was growing dark, and we had a 2.63-mile walk back to civilization. Plus our tummies were seriously growling, so we left Contentment Falls and started our journey back to the college grounds.

Admit it; you want to go now don’t you? Well, why are you waiting? If you are hiking, this trail will take you about an hr to hike. It is 2.63 miles, and our pace was a slow 19 minutes per mile. Look we are old, on the plump side, and had to climb over and under stuff so give us a break! If you are lazy or have an off-road vehicle, you can also drive to Locust Stake Road and walk in from there. It is in the Locust Stake ORV Area. The coordinates for the falls are 34°34’39.5″N 83°23’04.7″W

Keep the Lust for Wandering Y’all!

There was an error retrieving images from Instagram. An attempt will be remade in a few minutes.